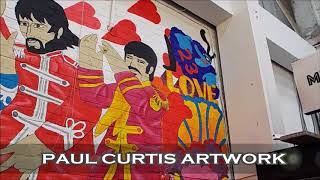 This was a fantastic mural to work on. Despite early issues with the phantom ladder pincher, I think it turned out really well. The Beatles images are based on their cartoon characters in The Yellow Submarine film, but they are in their Sergeant Pepper uniforms to add a bit of colour and boldness. A couple of characters also appear, the Blue Meanie and The Fool on the Hill. Thanks to Baltic Market and Independent Liverpool for the commission.

A cheeky circus chimp appeared on the exterior wall of Circo on Seel Street, Liverpool. The monkey is pulling a tongue at all who wander down Seel Street. Take a look at the photos of my latest street art mural here. The owner wanted a Victorian or Edwardian feel to the monkey, I added the red libertines style military jacket. I hope it has worked!

Working in the shadow of a Liver Bird

My current work on for LSP (Liverpool Shopping Park) involves a huge 40 metre long mural along a long hoarding. The work will involve many of Liverpool's most iconic buildings, made bold, bright and beautiful! It may take 3-4 weeks to complete! I am working beneath this wonderful metal sculpture that was produced by the artist Emma Rodgers. A Liver Bird constructed in Meccano. It is huge and stands proud on its own plinth in the Edge Lane shopping park.

Step into the enchanted forest...

Ainsley & Dale video is up!