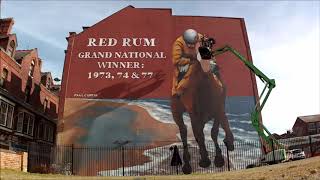 Paul's most recent mural is a street art tribute to the most famous race horse in the world, Red Rum. This time lapse and footage records Liverpool artist, Paul Curtis, painting a huge mural in honour of the legendary horse. The mural is 15 metres tall and 20 metres wide (300 square metres) - the biggest Paul has painted to date. It was commissioned by The Sefton Borough of Culture Committee in March 2020. The mural is located at Marine Drive in Southport, Merseyside. Red Rum 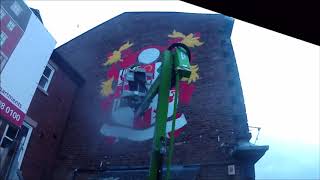 This mural is the Birkenhead Coat of Arms which was modified in the early 1990s by Tranmere Rovers FC and used on their shirts for a short period. The arms were officially granted to Birkenhead on August 28, 1878. The borough of Birkenhead was founded in 1877 after the merger of Birkenhead, Claughton-cum-Grange, Oxton and Tranmere. The new borough received its arms on August 28, 1878, and the symbols in the new arms were taken from the seals of the former towns. The crosier a 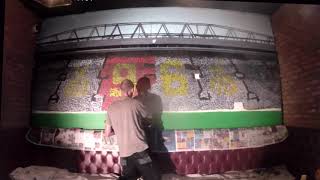 Mural depicting the famous KOP at Anfield. The Liverpool fans captured this image as they made a poignant mosaic tribute in aid of the 96 who tragically never came home from the FA cup semi final tie between Liverpool FC and Nottingham Forest in 1989. To go with this mosaic mural, I have also painted a portrait of Jurgen Klopp for the bar. This mural is located at Jurgen's Bierhouse on The Strand in Liverpool. The page is now up and running for the mural. Access the page here 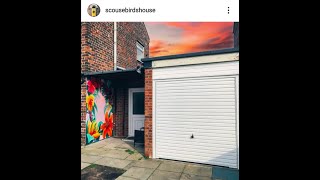 The Scouse Bird mural is up! Painted for Liverpool's well known blogger, Scouse bird problems at her home in Crosby. The mural, on the exterior of the bloggers home depicting tropical flowers and a macaw parrot on a pink graded background. Painted in September 2019 for Steph Johnson, for more details head to her Instagram and twitter @scousebirdproblems. Click here to see the murals page.